The World of Eterra is the setting of the game Last Epoch. 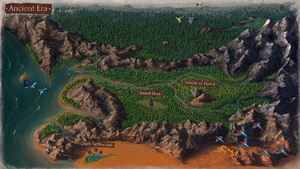 The world map as in the Ancient Era. 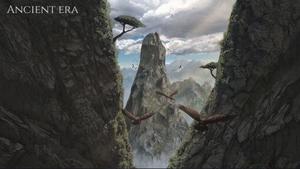 The Eastern Mountains as during the Ancient Era 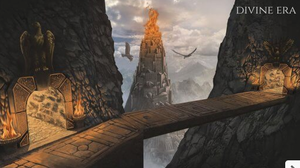 The Eastern Mountains as during the Divine Era 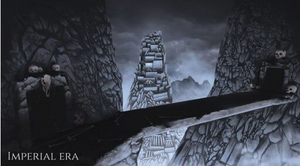 The Eastern Mountains as during the Imperial Era 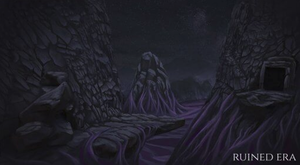 The Eastern Mountains as during the Ruined Era

The northlands stretch from the mountains to the northern edges of the known world. Forests fill the land north of the mountains until they gradually thin out into a tundra which extends for leagues until the land is overcome with glaciers.

To the south of the mountains lies a vast desert with a singular large oasis, besides which resides the Oasis City.

On the coast of the western sea lies Harbor City. Further into the sea rests an island which houses Lagon's Temple.

The eastern mountains are tall, imposing mountains which have been made the homes of Rahyeh during the divine era and the Immortal Emperor during the imperial era.

Time travel is a tangible existence on Eterra. Characters can travel through time with the aide of the Epoch, while items are able to travel through Eternity Caches.

Before there were worlds there was void. An endless abyss of impenetrable darkness, inky and swirling with chaos. From that chaos faint glimmers of light found each other, the power of creation shielding itself from the void, becoming worlds. The light and life inside these worlds angered the void, the order and harmony filling it with jealousy and hunger, but no matter much it raged they remained protected, only yielding once they had met their natural end. One world formed with an imperfection however, a fragment of void hidden amongst the light. This fragment of void would eventually lead to that world’s untimely fall, and worse give the void a power that may threaten creation itself. That world is Eterra.

The Time Before Humanity, the Ancient Era[edit | edit source]

The time when humans were in their infancy, living under the goddess Eterra’s protection. Legends say that Eterra crafted this world with her own hands, spreading life and vitality through the barren land, what existed before her none can say but herself and possibly The Observer. The ancient world was covered by forests and jungles, inhabited by beast people and a multitude of creatures that could only thrive in this wild time. This land was far too fierce for the young race of man, thus Eterra kept them hidden in her temple for untold ages before a calamity forced humanity out into the world.

Humanity has prospered under the guidance of the gods, developing culture and pushing the beast people to near extinction. Nomad cultures to the frozen north, a sea faring culture by the western sea, a mercantile city within the southern desert, and a strict theocracy high atop the eastern mountains. Rahyeh, the God of the mountains and the sun has begun a war to consume the other gods.

The different cultures and civilizations of mankind have begun to decline, a ruthless Emperor that has embraced undeath having subjugated any who would resist his rule. The beast people are down to their last, nature has begun to suffer, and the living humans are fighting a losing battle against the Undead Empire. The Undead Empire has embraced the strict culture of Rahyeh’s old domain but made it even more militaristic, embracing necromatic experiments fueled by the Emperor’s foul power.

Void has covered most of the surface, most of humanity fleeing underground, those who remain on the surface going mad. A last bastion of humanity exists underneath the surface, safe from the horrors that dwell above. They have lived in this place for generations, supplies depleting, until one day the void finds them and destroys the home they know as Last Refuge. At the end of all hopes, this is where your story begins.

The gods of Eterra are mighty being that each wield unimaginable power to create new forms of life, or to destroy it.

The Imperial Emperor ruled throughout the imperial era with a mighty fist. The study of necromantic arts at the core of his civilization and military prowess.

The Void is a mysterious entity which has taken over the entire world throughout the ruined era and threatens humanity's extinction.

The art of wielding the arcane has been passed down for generations from master to apprentice far before the void ruined the world drove humanity below the surface. The inheritors of this legacy now make up the Elders of Last Refuge.

The people of the Northlands all align themselves to the migrations of the great elk herds. Each Northlands Tribe follows three figures, the demigod offspring of Heorot who acts as a connection to the god, the chieftain who executes the law of the tribe, and a champion who acts as the tribe’s symbol of glory and strength.The greatest of the tribes follow the same structure as the lesser tribes. Heorot himself acts as the spiritual leader, a High Chieftain dictates law that all the tribes must follow, and a Great Champion commands the tribes when they must unite against an outside force and acts as the paragon of the people of the north.

The Diamond Priests are followers of Majasa. The provide religious guidance to the Nagasa and are the taskmasters of False Nagasa.

The Humans were created and sheltered by Eterra. They have existed throughout the eras, as a fledgling species finally branching out from the Temple of Eterra during the primal era, to immense prosperity during the divine era, and threatened with extinction during the Ruined Era.

The Nereid are merpeople that were created by Lagon after he killed the Sea Titan.

Wengari are half-elk half-men that were followers of Heorot who resented not being chosen and so used magic to transform themselves as to mimic Heorot’s image, in an attempt to gain his favor. Heorot rejected them, however, seeing this act as obscene, driving many into aligning with the rebellion of Morditas.

The Nagasa are creatures with golden scales and a jewel on their brows, in the shape of Majasa. They are created from Majasa's scales and skin, which is rejuvenated after consuming a Vessel Maiden.