Rahyeh is a God Non-Player Character. They are a prominent Story Character in the World of Eterra. 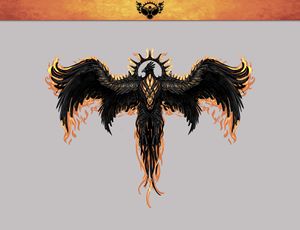 God of the east, master of the mountains, his flaming crest burns with the light of the sun. He has taken the form of a glorious eagle, fire raging from his golden feathers, his talons formed of black molten glass. He surveys his domain atop the highest peak of the eastern mountains, no transgression of his followers escaping his gaze, the punishment for such is swift and unforgiving. His followers obey him without question, donning armor crafted from the metallic feathers of his fierce brood of harpies and garuda, ready to die for their sun king. In the divine era Rahyeh declared war on the other gods, setting his sights on the north first, viewing their lack of development as weakness and sending his armies into their land.