Quests are Game Features that allow players to complete objectives throughout the World of Eterra, typically granting rewards for completing them. 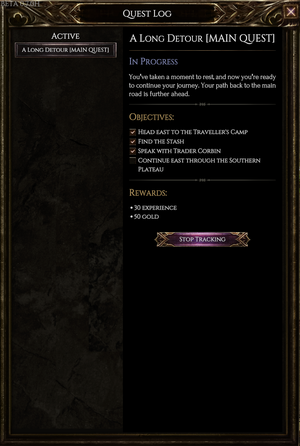 The Quest Log can be opened by pressing "J" by default.

The left side of the quest log window shows all quests that have been accepted and their completion status.

Each quest log indicates it's status, a short description of the state of the quest, list of objectives, list of rewards and a button that toggles tracking for the quest on the minimap.

Quests that are being tracked will have a small arrow pointing to their location on the minimap or map overlay. When a player is close enough to the objective the arrow will instead be represented by a pulsating circle. Additionally all tracked quests are displayed in a list beneath the minimap along with their current objective(s).

The main quests are the story and main campaign of the game. Completing the main quests will allow players to unlock endgame content.

Completion of these quests is optional and generally does not have unlocks outside of their rewards.

These are quests that can be given while inside the Monolith of Fate.