Last Refuge is a Town Place. 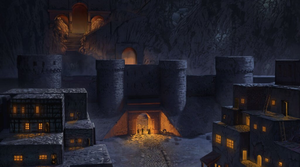 The slums of Last Refuge, inhabited by the Acolyte and the Rogue

Humanity has been driven underground to escape the all-consuming darkness, destined to live out its final days in the subterranean city of Last Refuge. The art of wielding the arcane has been passed down for generations from master to apprentice far before the void ruined the world and drove humanity below the surface. The inheritors of this legacy now make up the Elders of Last Refuge, the Mage being one of them. Tomes detailing the dark secrets of the Imperial Empire were stored in the Elders' archives which the Acolyte studied to learn of necromancy, resulting in her exile to the slums of Last Refuge. Corruption is a mainstay of Last Refuge, the Rogue taking advantage of shady deals, while the Sentinel fights alone to combat it as the other guards turn a blind eye. The Primalist is housed on the outskirts of the city with his mother, kept from the public eye so as not to alert the general public of life outside of the caverns of Last Refuge.

The day eventually came when the void came crashing through the rocks into Last Refuge spreading their corruption and wiping the settlement clean of life.