Heorot is a God Non-Player Character. They are a prominent Story Character in the World of Eterra. 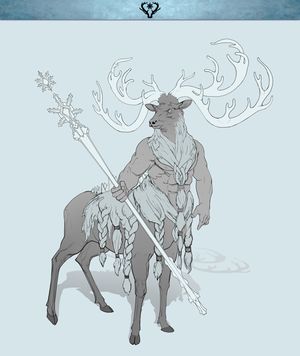 God of the north, master of the tundra wanderers, whose divine breath rises to the sky to form the aurora. He has taken the form of a massive white elk, his mane forever frozen over with the purest crystals of ice. His nature is kind and protective, leading his herd to fertile and bountiful land. Every generation he chooses a tribe of humans to follow with his herd and share in his wisdom, a Chieftain and a Champion raised from their numbers to be blessed by him.

The people of the Northlands all align themselves to the migrations of the great elk herds. Each tribe follows three figures, the demigod offspring of Heorot who acts as a connection to the god, the chieftain who executes the law of the tribe, and a champion who acts as the tribe’s symbol of glory and strength.The greatest of the Northlands Tribes follow the same structure as the lesser tribes. Heorot himself acts as the spiritual leader, a High Chieftain dictates law that all the tribes must follow, and a Great Champion commands the tribes when they must unite against an outside force and acts as the paragon of the people of the north.

Heorot’s eldest son Morditas rebelled against his father, seeing the idea of living to protect the humans as an insult. His followers roam the northern tundra, zealous berserkers and fierce half-elk half-men known as Wengari. The Wengari were followers of Heorot who resented not being chosen and so used magic to transform themselves as to mimic Heorot’s image, in an attempt to gain his favor. Heorot rejected them, however, seeing this act as obscene, driving many into aligning with the rebellion of Morditas. 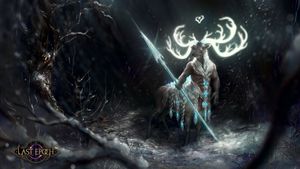