Health is one of the Character Stats which determines how much damage a character can take before dying. Health can be regained through Health Regeneration, the Potion, Modifiers from Passives and Equipment and certain Skills. 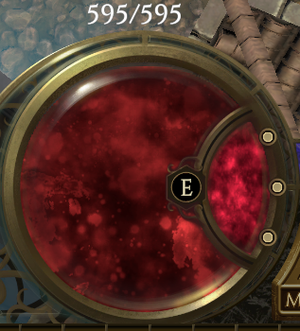 The health orb in the bottom left of the screen displays the maximum health and current health of the active player character. As the player's health goes down, the light centered around the player will gradually shift to red.

A demonstration of the player's light indicator shifting to red when low on health.

The maximum Health is also displayed in the Character Stats and Inventory windows.

Each character has an absolute maximum amount of Health. The maximum may be raised or lowered but can not be exceeded, even temporarily.

At the start of the game, each character begins with a maximum Health of 100. This is increased by:

The maximum Health of a character is calculated using

The Maximum Health also plays a role in the Combat Calculations in determining the character's defensive stats.