Classes are extremely important for progression in Last Epoch. In Last Epoch, you begin with a base class which then allows you to specialize to master classes. 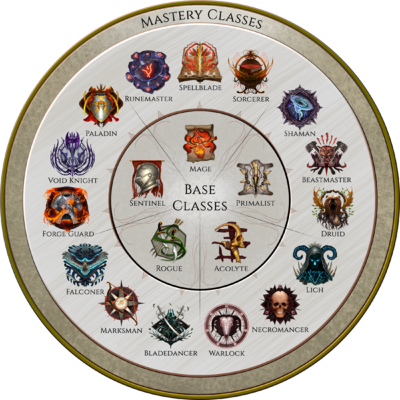 Base class selection is made during Character Creation. 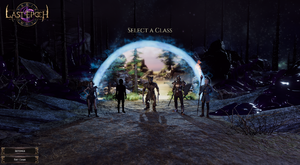 Specialization into master classes is done by taking the appropriate Passives unlock node.

A player's choice of class determines their:

In the most recent game version all classes are playable except for the Rogue and their subclasses, Warlock, and Runemaster.

A rebellious scion who disobeyed her masters to seek out forbidden magic, the Acolyte will let nothing stop her from becoming more powerful.

An Elder cresting his prime, the Mage wields the power of the arcane to make up for his past wrongs and to give the world a new future.

A warrior from the north who has seen the horrors of war first hand, the Primalist seeks communion with the power of eterra, the power of the earth.

Unrivaled in bow and blade, the Rogue strikes out from the shadows to find a higher purpose for her deadly talents.

Strong in honor and fearsome in combat, the Sentinel stands stalwart against what is unjust even at the end of the world.

An acolyte who has embraced the corruptive nature of their power and uses the magic of blood and death even at the expense of their own health.

A commander of undeath, they send their animated thralls to battle perfectly willing to sacrifice them as they deem fit.

Master of the forbidden arts, they tear into the essence of their foes, twisting and corrupting their spirits with relentless curses and hexes.

A savant of the art of runes, able to infuse magic into offensive and protective wards that devastate those who trespass them.

A mage who has mixed martial prowess and cunning with their mastery of spells to face enemies in close range.

A warrior who takes command with the might of beasts, leading them by example with strength and power.

In tune with the long dormant power of the earth, they bend the fury of nature to their will even as they take the form of ferocious creatures.

A living storm that uses the power of tornadoes and lightning to destroy their enemies with the aid of sacred totems.

An artisan of shadows, they dash in and out of the reach of their enemies, each movement another deadly cut.

A master tactician who employs deceptive traps and the aid of a fearsome bird of prey, swooping across the battlefield to gain an advantage against their enemies.

A master of the bow, adept at engaging foes from a distance and keeping them there.

A bulwark of strength and steel whose mastery of weapons, armor, and the animation of molten metal dominates the battlefield.

A righteous warrior focused on empowering and healing his allies who can take down swaths of enemies with holy fire.

A sentinel who has taken part of the void inside themselves and uses it to devastate their foes even at the cost of his own life.